How did dozers get their name? Cat says it all started with the blade

How did dozers get their name? Cat says it all started with the blade

Combined with the tractive force of the entire machine, the blade is where things get done on a dozer. In fact, says Cat, the entire name of the machine – dozer – originally comes from the blade. 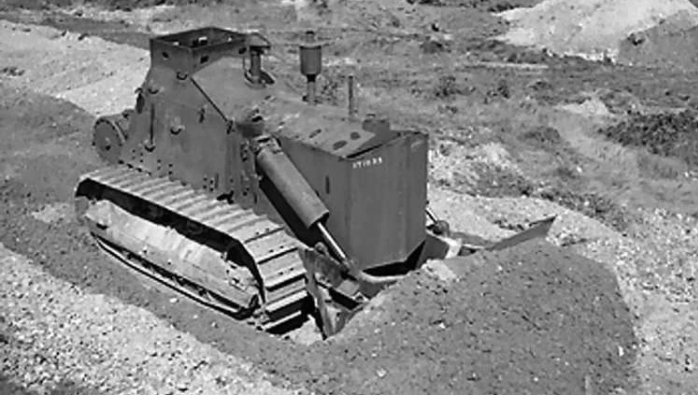 As it celebrates the 75th anniversary of its manufacturing of the workhorse dozer blade, Cat has delved into the evolution of the blade, and how it came to name the entire machine.

The term “dozer,” says Cat, originally referred to the steel plate and an operating mechanism attached to the front of what Cat until recently called track-type tractors. In their 1800s-era iterations, dozer blades were made of wood and affixed to the front tend of a pole pulled by horses or oxen. A blade’s main job was to spread loose dirt over a fill as it accumulated.

One of Caterpillar’s predecessor companies, Holt Manufacturing, introduced a dozer blade in 1914 positioned in in front of the machine and controlled by a rope windlass fastened to the tractor’s main frame. Holt merged with C.L. Best Tractor in 1925 to form Caterpillar.

The dozer gained recognition throughout World War II as an essential machine for the Allied forces. “If I had to give credit to the instruments and machines that won us the war in the Pacific, I would rank them in this order: submarines first, radar second, planes third, bulldozers fourth,” said American Admiral William F. Halsey.

Cat says the dozer owes its recognition in popular culture due to news coverage that spotlighted soldiers’ affinity for the machine. However, because the news coverage during the war did not specify that the “dozer” was actually the blade and not the tractor, the term became the norm to refer to the whole machine.

Before and during WWII, Cat had depended on outside suppliers to make its dozer blades. In early 1945, however, the company began developing its own blades. Versions included straight, angling and U shapes that were both cable and hydraulically controlled.

Throughout 1945, Cat engineers tested the blades at its proving grounds in Illinois and Arizona, and field tests followed throughout the US. Production shipments began that same year. These blades and their host machines worked on major engineering projects, Cat says, including the U.S. interstate system, the Three Gorges Dam in China and the widening of the Panama Canal.

With advanced hydraulics, extremely durable and smooth-riding undercarriages and machine control technology, today’s models are a far cry from the dozers that cleared the path to stardom for this machine type. But thanks to their legendary performance at a time of great need, no matter how technologically advanced these machines get, they’ll always be a “dozers” at their core.